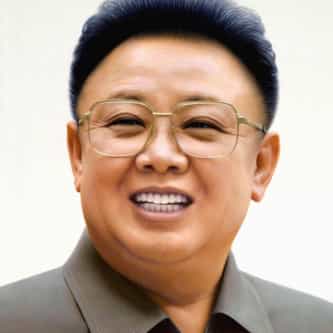 Kim Jong-il (officially transcribed Kim Jong Il; Korean: 김정일; Korean pronunciation: [kim.dzɔŋ.il]; 16 February 1941 or 1942 – 17 December 2011) was the second leader of North Korea. He ruled from the death of his father Kim Il-sung, the first leader of North Korea, in 1994 until his own death in 2011. He was an unelected dictator and was often accused of human rights violations.In the early 1980s, Kim had become the heir apparent for the leadership of the Democratic People's Republic of ... more on Wikipedia

Kim Jong-il IS LISTED ON

#956 of 2,443
2.3M VOTES The Most Influential People of All Time People on the West Coast are 2x more likely to vote for this
#1 of 12
71.1k VOTES Historical Figures Whose Descendants Looked Just Like Them
#1 of 17
8.4k VOTES The Most Ridiculous Titles Of Nobility In History
114k VIEWS Bizarre Obsessions of Dangerous Dictators
439.7k VIEWS 22 Historical Figures With Preserved Body Parts You Can Still Visit Today
#4 of 97
828 VOTES Who Is The Most Famous Kim In The World?
22.7k VIEWS Cartoons, Erotica And Other Bizarre Hobbies Of History's Most Brutal Leaders
78.6k VIEWS 26 Intimidating World Leaders Who You Never Realized Were Super Short
27.5k VIEWS Bizarre Stuff You Never Knew Dictators Collected
#22 of 47
100.8k VOTES Hilarious Name Puns That Will Make You Roll Your Eyes So Hard
13.1k VIEWS Even History's Most Evil Dictators Had Pets
14.3k VIEWS 100+ Atheist Politicians and Lawyers
List of Famous Dictators Famous People From Russia Famous Male Dictators Famous Athletes from South Korea Famous University Of Malta Alumni