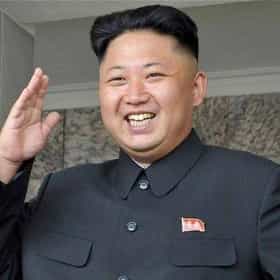 Kim Jong-un (officially transcribed Kim Jong Un; Korean: 김정은; Korean pronunciation: [kim.dzɔŋ.ɯn]; born 8 January 1983 or 1984) is a North Korean politician. He is currently the incumbent Supreme Leader of North Korea since 2011 and Chairman of the Workers' Party of Korea since 2012. Kim is the second child of Kim Jong-il (1941–2011), the country's second leader from 1994 to 2011, and Ko Yong-hui (1952–2004). He is the grandson of Kim Il-sung, who was the founder and first leader of North Korea from 1948 to 1994. Kim is the first North Korean leader who was born after the country's founding, and is also the second youngest currently-serving head of government in the world.From late ... more on Wikipedia

Kim Jong-Un's Luxurious Childhood Was Spent Preparing For Dictatorship 23.5k views North Korean leader Kim Jong-un is an enigma in many ways, and little is known about what he was like as a boy or how he was...

Kim Jong-un is ranked on...

#622 of 1,043 Celebrity Death Pool 2020 36k VOTES They may be beloved performers, award winners, or game changers, but no matter how famous, you can’t escape death. This cele...
#462 of 531 Annoying Celebrities Who Should Just Go Away Already 1.2M VOTES The most annoying celebrities, ranked by entertainment fans themselves. These annoying celebs are obnoxious, overexposed, ...
#198 of 837 The Scariest Threats to the United States 225.7k VOTES Lots of stuff to be scared of these days... more than usual, even in our normal fear-based-economy. The media and the pundit...
#2 of 27 All Of Donald Trump's Nicknames For People, Ranked By How Inappropriate They Are 8.8k VOTES As a man who often speaks in short, declarative spurts, President Donald Trump loves a good nickname, naturally. I...
#57 of 1,452 Celebrity Death Pool 2018 477.7k VOTES Welcome to Celebrity Death Pool 2018! In increasingly uncertain times, there remains one constant in life - we all die. Cele...
#9 of 60 People who voted for Kim Jong-un... People in the Northeast are 2x more likely to vote for this 60+ Unbelievable #MakeupTransformations 127k VOTES Makeup transformations (or #makeuptransformations, as you'll see it on Twitter et al.) is a fantastic new trend popping up o...
#18 of 868 Celebrity Death Pool 2016 370.1k VOTES Celebrity death pool 2016: Here's a large list of celebrities we think just might die this year. The only certainties in l...
#67 of 81 Celebrities Who Made The Biggest Cultural Impact In 2017 5.7k VOTES The celebrities who influenced culture in 2017 were fashion innovators, outspoken activists, social media influencers, cutti...
#33 of 41 The Most Influential People in 2018 29.6k VOTES From Oscar winners and musicians to political figures and activists, this list compiles the most influential people of ...
#29 of 87 Guests You Hope to See on Late Show with Stephen Colbert 8.2k VOTES Late Show signed back on with Stephen Colbert at the helm in the summer of 2015, prime presidential election season, and the...
#18 of 26 The Most Influential People of 2014 6.6k VOTES The most influential people of 2014 changed the world through politics, religion, activism, and entertainment. This list ran...
#34 of 160 Celebrity Death Pool 2013 15.4k VOTES Every year we lose more and more famous celebrities. Whether it's from natural causes, suicide, drug abuse or just plain cra...
#30 of 34 The Most Influential People of 2011 6.9k VOTES The most influential people of 2011 made us laugh, brought us hope, widened our horizons and changed the way we live our liv...
#23 of 55 The Most Influential People of 2012 7.2k VOTES The most influential people of 2012 include world leaders, CEOs, athletes, actors, musicians and many others who made an imp...
#21 of 38 Who Do You Think Is Really Making Decisions In The White House? 2.4k VOTES On August 13, 2018, former White House aide Omarosa Manigault Newman released a recording of President Trump reacting t...
#17 of 21 Who Should Be Named TIME's Person Of The Year For 2017? 6k VOTES UPDATE: On December 6, 2017, Time announced "The Silence Breakers" of the #MeToo Movement as the 20...
#52 of 53 The Most Influential People of 2013 4.5k VOTES The most influential people of 2013 are those top people from around the world in politics, news, sports, entertainment and ...
#3 of 22 22 Hilarious Pictures of World Leaders with Man Buns 617 VOTES Politics can be stressful. Maybe that's why some folks out there are asking, "What if world leaders had man buns?"...
Bizarre Obsessions of Dangerous Dictators 71.7k VIEWS The stone cold fact about being a dictator is that you get to be obsessed with whatever you want. Many strongmen have applie...
Real-Life Cults of Personality You Won't Believe 10.9k VIEWS So what is a cult of personality, exactly? It arises when mass media - television, newspapers, websites, posters, billboards...
#15 of 31 The Most Powerful Time Covers 3.2k VOTES List of the most memorable Time Magazine covers, featuring the coolest photographs, sexiest celebrity shots, and most innova...
Bizarre Stuff You Never Knew Dictators Collected 24k VIEWS Dictators typically rule by fear, intimidation, and making themselves the center of a cult of personality. But while doing s...
Unnerving Pictures Of Monstrous Historical Figures As Kids 63.8k VIEWS Monsters must start somewhere. Terrible people come from all walks of life, regardless of wealth, privilege, or backgro...
Here's What World Leaders Really Think Of Donald Trump 119.7k VIEWS In November 2017, just shy of one year in office, President Donald Trump’s approval ratings hit an all-time historic low. If...
Famous People Named Kim 32.2k VIEWS List of famous people named Kim, along with photos. How many celebrities named Kimberly can you think of? The famous Kims be...
#2 of 6 Dennis Rodman's Strangest Friends 80 VOTES List of famous people who are friends with Dennis Rodman, listed alphabetically with photos when available. Every person on ...
Celebrity Bulls Fans 3.3k VIEWS Rodman. Pippen. Rose. And, of course, Jordan. The Chicago Bulls have boasted some of the best players in the NBA over the ye...

Kim Jong-un is also found on...