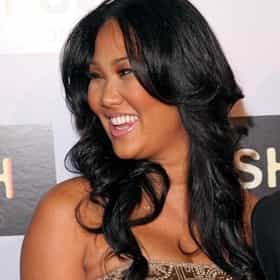 Kimora Lee Leissner (née Perkins, formerly Simmons; born May 4, 1975), known professionally as Kimora Lee Simmons, is an American fashion model and fashion designer who took over Baby Phat after Russell Simmons and was CEO/creative director through 2010. She had her own reality television shows Kimora: Life in the Fab Lane (2007–2011) and Kimora: House of Fab (2013) Kimora Lee Perkins was born in St. Louis, Missouri. Her mother, Joanne "Kyoko" Perkins, was born in Korea to a Japanese mother and adopted by a U.S. serviceman during the Korean War and raised in the U.S. She later worked as an administrator for Social Security. Kimora's father, Vernon Whitlock Jr., is ... more on Wikipedia

Kimora Lee Simmons is ranked on...

#59 of 87 The Worst TV Talent Show Judges Of All Time 7.7k VOTES Judges are the key part of talent shows, it's their knowledge and expertise that decides which competitors have the skills t...
#42 of 64 The Most Beautiful Full-Figured Women on Earth 333k VOTES After the age of thin models in the 1990's and an increase in "celebrity" and reality TV culture in the early 2000...
#31 of 42 The Best Black Reality TV & Game Show Judges 1.1k VOTES Reality TV and game show judges control the chaos of unscripted television. The best black reality TV hosts and judges have ...
#18 of 28 The Best Black Female Talk Show Hosts In TV History 183 VOTES Talk show hosts control conversations about everything from politics to relationships. The best black female talk show hosts...
28 Famous Divorcées Who Kept Their Ex-Husbands' Names 172.5k VIEWS After a divorce, many women keep their ex-husband's name, especially if they are a known celebrity whose name is part of the...
9 Celebrities Whose Parents Have Been In Prison 199k VIEWS List of Celebrities Whose Parents Have Been in Prison, ranked by fame and popularity. Several famous people came from less t...
Famous People Who Meditate 238k VIEWS Meditation is a practice that encourages the mind to slow down and also benefits the body and soul. Many famous actors, musi...
Female Celebrities Who Are 6’0" 12.6k VIEWS This list contains examples of female celebs who are 6'0" loosely ranked by fame and popularity. Standing above the ave...
Celebrity Babies Who Were Born in 2015 44.7k VIEWS Another year, another crop if super adorable celebrity kids! This list includes all of the celebrity babies born in 2015. Sa...