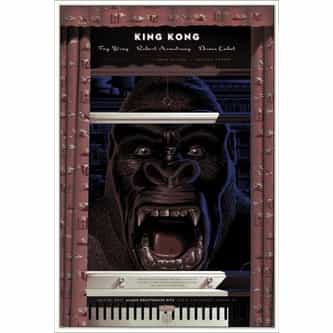 King Kong is a 1933 American fantasy monster/adventure film directed and produced by Merian C. Cooper and Ernest B. Schoedsack. The screenplay by James Ashmore Creelman and Ruth Rose was from an idea conceived by Cooper and Edgar Wallace. It stars Fay Wray, Bruce Cabot and Robert Armstrong, and opened in New York City on March 2, 1933 to rave reviews. The film tells of a gigantic, prehistoric, island-dwelling ape called Kong who expires in an attempt to possess a beautiful young woman. ... more on Wikipedia

King Kong IS LISTED ON