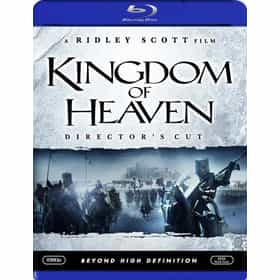 Kingdom of Heaven is a 2005 epic historical drama directed and produced by Ridley Scott and written by William Monahan. It stars Orlando Bloom, Eva Green, Jeremy Irons, David Thewlis, Brendan Gleeson, Marton Csokas, Liam Neeson, Edward Norton, Ghassan Massoud, and Alexander Siddig. The story is set during the Crusades of the 12th century. A French village blacksmith goes to aid the Kingdom of Jerusalem in its defense against the Ayyubid Muslim sultan Saladin, who is battling to reclaim the city from the Christians leading to the Battle of Hattin. The film script is a heavily fictionalized portrayal of the life of Balian of Ibelin. Filming took place in Ouarzazate, Morocco, where Scott ... more on Wikipedia

Kingdom of Heaven is ranked on...

#84 of 374 The 50+ Best War Movies Ever Made, Ranked 517.5k VOTES From classics like Saving Private Ryan to newer entries like Dunkirk and 1917, this list ranks the best movies about war, ba...
#91 of 599 The Greatest Epic Movies Ever Made 286.3k VOTES Need some movie ideas? Check out this list of the best epic films of all time, which encompasses some of the best movie...
#5 of 34 25+ Fantastic Pre-Modern War Movies That Take Place a Long Time Ago 4.2k VOTES Pre-modern war movies feature epic battles and hand-to-hand combat to create some of the bloodiest wars ever caught on film....
#196 of 551 The Best Movies of the 2000s 72.6k VOTES List of the best films released between the years 2000 and 2009, the era frequently referred to as the '00s or the "aug...
#7 of 15 Director's Cuts That Are Better Than The Theatrical Movies 1.9k VOTES When filmmakers first release their movies to theaters, it’s not always in the form they would prefer. Studio mandates, publ...
#16 of 35 The Best Movies About Historical Battles 6.8k VOTES Some battles are ones for the history books - and the historical films. The best historical war battle movies make the horro...
#11 of 19 Pretty Good Oscar Bait Movies 1k VOTES Every year, Hollywood holds its collective breath to find out which films, actors, directors, and more will be awa...
#65 of 83 The Very Best Sword And Sorcery Movies 29.5k VOTES   A list of all the best sword and sorcery movies ever made, many of which are streaming on Netflix and Amazon Prime....
#15 of 88 The Very Best Liam Neeson Movies 11.6k VOTES Here is a list of the best Liam Neeson movies, ranked best to worst by thousands of fans' votes. When Liam Neeson made his a...
#22 of 93 The Best Drama Movies for Action Fans 572 VOTES These are the best action drama movies the hybrid genre has to offer. They tend to be slower movies that are punctuated...
#1 of 44 The Best Knight Movies 14.8k VOTES A list of the best knight movies ever made, with posters and information about the director, actors, and release date. What ...
#8 of 27 The Best Movies Directed by Ridley Scott 2.8k VOTES List of all movies directed by Ridley Scott ranked from best to worst with photos. Films directed by Ridley Scott are list...
Premiere's The Must-Have Hollywood Movies DVD Collection 20.2k VIEWS Premiere's list of the top DVD's a movie-fan must own. These are movies you need to have in your collection if you consider ...
#1 of 12 The Best Movies About The Crusades 1.7k VOTES A list of the best crusades movies ever made, ranked by movie fans with film trailers when available. This crusades movie li...
#36 of 203 The Best R-Rated Adventure Movies 2.9k VOTES List of R-Rated adventure movies, ranked from best to worst with movie trailers when available. This list takes the best R-R...
13 Pretty Accurate Movies About Historical Illnesses 5.8k VIEWS Throughout history, humanity has been plagued by innumerable diseases that have deeply impacted the course of our global civ...
#8 of 53 The Best Jeremy Irons Movies 1.8k VOTES List of the best Jeremy Irons movies, ranked best to worst with movie trailers when available. Jeremy Irons's highest grossi...
#8 of 28 The Best Orlando Bloom Movies 3.5k VOTES List of the best Orlando Bloom movies, ranked best to worst with movie trailers when available. Orlando Bloom's highest gros...
#63 of 100 Movies Turning 15 In 2020 648 VOTES It's time to wish a happy birthday to all the movies turning 15 this year. Without a doubt, 2005 was an incredible year for ...

Kingdom of Heaven is also found on...