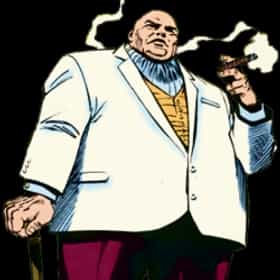 The Kingpin is a fictional supervillain that appears in the Marvel Comics Universe. He is portrayed as one of the most feared and powerful crime lords in the Marvel Universe, typically holding the position of New York City's crime overlord. The character first appeared in The Amazing Spider-Man #50. He became one of the key enemies of both Spider-Man and Daredevil, and is also a recurring adversary of the Punisher. IGN's list of the Top 100 Comic Book Villains Of All Time List ranked The Kingpin as number 10. His signature look is his extraordinarily heavyset appearance, with most of his mass consisting of muscle. He usually wears a white suit jacket and carries a walking stick, which ... more on Wikipedia

Kingpin is ranked on...

#885 of 1,608 The Greatest TV Characters of All Time 1.2M VOTES List of TV's most memorable characters, of all time, chosen by the Ranker community. What makes a character live on in the p...
#216 of 961 The Greatest Movie Villains of All Time 1.2M VOTES While some of us tend to despise movie villains, plenty of movie-goers favor some of these antagonists. Whether that's ...
#76 of 194 The Best Characters In The Marvel Cinematic Universe 545.7k VOTES Since the debut of Iron Man in 2008, the Marvel Cinematic Universe has been delivering top-notch superhero movies with some ...
#3 of 15 15 Comic Book Characters Who Are Way Stronger Than They Get Credit For 3.2k VOTES It’s not exactly headline news that a lot of superheroes are strong. We’ve all seen Wonder Woman and the Hulk perform enough...
#2 of 44 The Best Daredevil Villains, Enemies & Foes Ever 7.5k VOTES List of the most notorious Daredevil baddies, ranked by the fans. "The Man Without Fear" has been fighting crime s...
#17 of 20 The Villains Who Hurt Us The Most Over The 2010s 867 VOTES The 2010s might just have been the “Decade of the Villain.” That period of 10 years brought fans across multiple mediums and...
#6 of 20 The Best Archenemies in Marvel Comics 10.9k VOTES Archenemy, arch-rival, arch-nemesis whatever you want to call it, it's personal. The yin to the yang, the polar opposite, th...
#41 of 56 The Best Superheroes To Be For Halloween 1.7k VOTES Halloween is here, which means it's time to figure out your costume for the big night. Do you go as some current meme that...
#6 of 84 People who voted for Kingpin... also upvote Star Wars Franchise on The Best Movies of All Time The Best Spider-Man Villains 104.4k VOTES Here is the list of the greatest Spider-Man villains and enemies Peter Parker has ever had. This Spider-Man villain list inc...
The 20 Richest Comic Book Characters of All Time 783.5k VIEWS Here's a list of the richest superheroes, comic book characters and wealthiest villains of all time, ranked from richest to ...
A Surprising Amount Of Marvel Characters Have Run For Political Office 2.6k VIEWS Online controversies prove not everyone is comfortable with the Marvel Comics version of politics, but the publisher has put...

Kingpin is also found on...