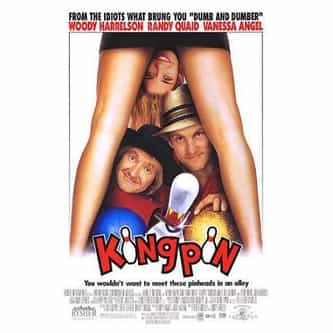 Tagline
A comedy right up your alley.
From the idiots what brung you "Dumb and Dumber"
The movie the Olympuk comitee wouldn't allow you to see.
You wouldn't want to meet these pinheads in an alley.

Kingpin is a 1996 American sport comedy film directed by the Farrelly brothers and starring Woody Harrelson, Randy Quaid, Vanessa Angel, and Bill Murray. It was filmed in and around Pittsburgh, Pennsylvania as a stand-in for Scranton, Amish country and Reno, Nevada. ... more on Wikipedia

Kingpin IS LISTED ON