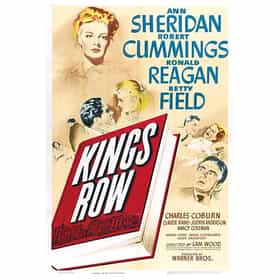 Kings Row is a 1942 film starring Ann Sheridan, Robert Cummings, and Ronald Reagan that tells a story of young people growing up in a small American town at the turn of the twentieth century, beset by social pressure, dark secrets, and the challenges and tragedies one must face as a result of these hard facts. The picture was directed by Sam Wood. The film, which was Ronald Reagan's most notable role during his early acting career at Warner Brothers, was adapted by Casey Robinson from a best-selling 1940 novel of the same name by Henry Bellamann. The movie also features Betty Field, Charles Coburn, and Claude Rains. The musical score was composed by Erich Wolfgang Korngold, and the ... more on Wikipedia

Kings Row is ranked on...

Kings Row is also found on...

Romance Movies and Films Movies Produced by Hal B. Wallis List of All Movies Released in 1942 List of Films Scored By Erich Wolfgang Korngold