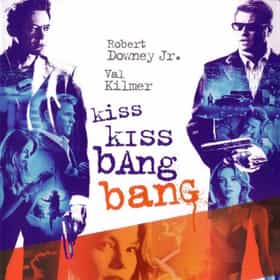 Kiss Kiss Bang Bang is a 2005 American neo-noir dark comedy film written and directed by Shane Black, and starring Robert Downey, Jr., Val Kilmer, Michelle Monaghan and Corbin Bernsen. The script is partially based on the Brett Halliday novel Bodies Are Where You Find Them, and interprets the classic hardboiled literary genre in a tongue-in-cheek fashion. The film was produced by Joel Silver, with Susan Downey and Steve Richards as executive producers. Shot in Los Angeles between February 24 and May 3, 2004, the film debuted at the 2005 Cannes Film Festival on May 14, and received a limited release in cinemas on October 21, 2005. ... more on Wikipedia