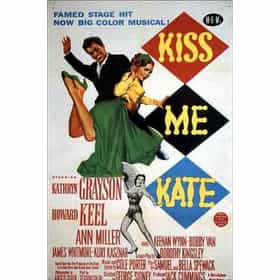 Kiss Me Kate is the 1953 MGM film adaptation of the Broadway musical of the same name. Inspired by The Taming of the Shrew, it tells the tale of musical theater actors, Fred Graham and Lilli Vanessi, who were once married and are now performing opposite each other in the roles of Petruchio and Katherine in a Broadway-bound musical version of William Shakespeare's play. Already on poor terms, the pair begin an all-out emotional war mid-performance that threatens the production's success. The only thing keeping the show together are threats from a pair of gangsters, who have come to collect a gambling debt from the show's Lucentio, Bill Calhoun. In classic musical comedy fashion, ... more on Wikipedia

Kiss Me Kate is ranked on...

#95 of 371 The Best Musical Movies of All Time 151.1k VOTES The best musical movies of all time, ranked by fans and critics. This list include both the best original musical movies and...
#67 of 100 The Best Dance Movies Ever Made 21.7k VOTES Dance movies have been around since the inception of film: the best dance movies manage to make the audience care about the ...
#8 of 29 The Best Modern Versions of Shakespeare Plays 1.6k VOTES List of the best modernized versions of Shakespeare plays. There are movies out there based on the plays of William Shakespe...
#70 of 199 The Best Metro-Goldwyn-Mayer Movies List 4.4k VOTES List of Metro-Goldwyn-Mayer movies, ranked best to worst, including trailers, genres, and release dates. Metro-Goldwyn-Mayer...
#28 of 788 The Best Movies of 1953 6k VOTES List of the best movies of 1953, with movie trailers when available. Action hero Steve McQueen made his first appearance on ...
#17 of 38 The Best '50s Romantic Comedies 1k VOTES The 1950s are often remembered as a time marked by wholesome family values. But that doesn't mean that the decade's moviegoe...
#28 of 52 The Best Comedy Movies of the 1950s 3k VOTES Some of the best '50s comedy movies include Marilyn Monroe, the Blonde Bombshell herself. She appears in several i...
#5 of 23 The Best Howard Keel Movies 570 VOTES List of the best Howard Keel movies, ranked best to worst with movie trailers when available. Howard Keel's highest grossing...

Kiss Me Kate is also found on...