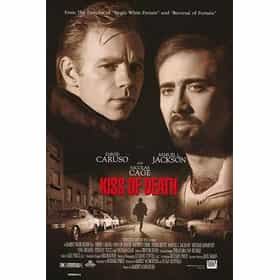 Kiss of Death is a 1995 crime thriller film starring David Caruso, Samuel L. Jackson, Nicolas Cage, Helen Hunt, Ving Rhames, and Stanley Tucci, directed by Barbet Schroeder. The film is a very loosely based remake of the 1947 film noir classic of the same name that starred Victor Mature, Brian Donlevy, and Richard Widmark. It was screened out of competition at the 1995 Cannes Film Festival. Like the original Kiss of Death, the film was released by 20th Century Fox. ... more on Wikipedia

Kiss of Death is ranked on...

Kiss of Death is also found on...