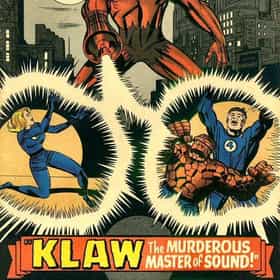 Klaw (Ulysses Klaue) is a fictional character, a supervillain appearing in American comic books published by Marvel Comics. The character is depicted as a human physicist who has been transformed into solid sound, and who wears a sonic emitter on his right wrist as a prosthetic device. He has often been shown in conflict with the Fantastic Four and the Avengers and is an enemy of the Black Panther and Ka-Zar. The character is featured in other Marvel-endorsed products such as arcade and video games, animated television series, and merchandise such as trading cards. Andy Serkis portrayed the character in the Marvel Cinematic Universe films Avengers: Age of Ultron (2015) and Black ... more on Wikipedia

Klaw is ranked on...

#11 of 47 The Best Villains In The Marvel Cinematic Universe 8.7k VOTES The Marvel Cinematic Universe may have its share of awesome heroes, but for every great hero, there’s an equally awesome vil...
#91 of 125 People who voted for Klaw... also upvote Star Wars Franchise on The Best Movies of All Time are 11x more likely to vote for Doctor Doom on this list The Best Comic Book Characters Created by Stan Lee 100.4k VOTES Stan "The Man" Lee is the most iconic and innovative comic creators of all time. He invented, or had a part in cre...
#17 of 45 The Best Fantastic Four Villains Ever 5.2k VOTES List of the most notorious Fantastic Four adversaries, ranked by the fans. Created by Stan Lee and Jack Kirby way back in 19...
#2 of 66 The Best Villains Black Panther Has Ever Faced 7.7k VOTES Black Panther, also known as T'Challa, King of Wakanda, is the first black superhero introduced in mainstream comics. Create...
#170 of 198 The Greatest Immortal Characters in Fiction 20.5k VOTES Immortality is a common theme in fiction. It often explores many different themes, from what it means to live forever, to ...
#27 of 32 The Best Facial Hair in Comics & Superheroes with Beards 15.6k VOTES Being a superhero is about as manly as it gets. They're strong, smart, independent, and they save people! You know what else...
#7 of 49 Ant-Man's Greatest Villains & Foes 9.2k VOTES Ant-Man is a mantle taken up by three very different men, but no matter what, he has a long list of formidable villains givi...
#36 of 51 The Best Black Widow Villains 3.2k VOTES Black Widow has had quite the history, and to this day we still don't know most of it. She's an ex-Russian spy who (dependin...
List of All Hulk Villains & Enemies 129.3k VIEWS This is a full list of all Hulk enemies and supervillains that has ever existed. The following Hulk enemy list can be sorted...
The Complete List of All Fantastic Four Villains and Enemies 36.2k VIEWS Whether out in space or down here on Earth, the Fantastic Four have our backs, even up against baddies like Mole Man and eve...