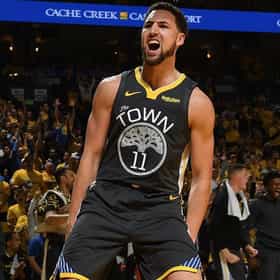 Klay Alexander Thompson (born February 8, 1990) is an American professional basketball player who plays for the Golden State Warriors of the National Basketball Association (NBA). He is credited as one of the greatest shooters in NBA history. A three-time NBA champion with the Warriors, he is a five-time NBA All-Star and a two-time All-NBA Third Team honoree. He has also been named to the NBA All-Defensive Second Team. Thompson is the son of former NBA player Mychal Thompson. He played college basketball for three seasons with the Washington State Cougars, where he was a two-time first-team all-conference selection in the Pac-10. He was selected in the first round of the 2011 NBA draft ... more on Wikipedia

Klay Thompson is ranked on...

Klay Thompson is also found on...