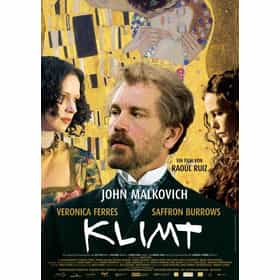 Klimt is a 2006 Austrian art-house biographical film about the life of the Austrian Symbolist painter Gustav Klimt. It was written and directed by Raoul Ruiz, with an English screenplay adaptation by Gilbert Adair. The director of photography was Ricardo Aronovich, and the music was composed by Jorge Arriagada. The title role was played by John Malkovich and the cast included Stephen Dillane. Both a 130 minute long director's cut and a shortened producer's cut of 96 minutes were shown at the 2006 Berlin Film Festival. ... more on Wikipedia

Klimt is ranked on...

Klimt is also found on...