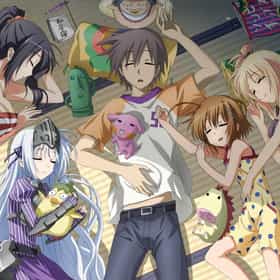 Is This a Zombie?, also known as Korezom for short, is a Japanese light novel series by Shinichi Kimura, with illustrations by Kobuichi and Muririn. Since January 2009, 17 volumes have been published by Fujimi Shobo under their Fujimi Fantasia Bunko imprint. There are currently five different manga adaptations based on the universe of Kore wa Zombie Desu ka? being serialized. A 12-episode anime adaptation produced by Studio Deen aired in Japan from January 11, 2011 to March 31, 2011 on TV Saitama and other networks. A second season, titled Kore wa Zombie Desu ka? of the Dead, aired in Japan from April 5, 2012 to June 7, 2012 on Tokyo MX and other networks. ... more on Wikipedia

#145 of 846 The Best Anime Series of All Time 5.9M VOTES You love anime but what tops this list of the best anime series ever made? Top anime series include shows like Death Note, A...
#98 of 130 The Best Fantasy Anime of All Time 394k VOTES From classics like Wolf's Rain to newer series like Sword Art Online, fantasy is one of the most popular genres of anime. Th...
#178 of 315 The Best English Dubbed Anime of All Time 997.4k VOTES If you're one of those people who only watches anime in Japanese, we don't blame you. English dubs can really ruin a series ...
#20 of 39 The 25+ Best Ecchi Action Anime Ever Made 50.8k VOTES Since ecchi has so many sub genres, we present you with the best ecchi action anime of all time, ranked by fans like you. Wh...
#15 of 41 The 24+ Best Ecchi Comedy Anime of All Time 48.5k VOTES What is the funniest ecchi anime of all time? We're letting the crowd decide with this ranked list of the best ecchi comedy ...
#41 of 51 The Best Action Manga of All Time 16.8k VOTES Sometimes you just want to sit back and read a story with a bunch of fights and explosions, and action manga is the perfect ...
#19 of 31 The Best Anime Like KonoSuba 1.8k VOTES Need to find more anime like KonoSuba? After dying a laughable death, Kazuma Satou has been given a chance to be reborn...
#16 of 79 The Best Harem Manga of All Time 18k VOTES If there's one type of character you should be jealous of, it's the main character of a harem manga. He's surrounded by beau...
#2 of 16 16 Random Facts About Anime That Might Just Blow Your Mind 8.3k VOTES How much do you know about anime? Would you consider yourself an anime expert, or merely a novice? Do you want to impress yo...
#6 of 13 The 13 Best Monster Girl Anime Of All Time 7.7k VOTES Monster girl anime is a niche genre that's started to make its way into the mainstream. These shows feature girls and w...
#24 of 33 The Best Zombie Related TV Series 281 VOTES These are the best zombie TV shows of all time, according to fans of the undead. There's something special about these shamb...
#12 of 100 The Best Harem Anime Of All Time 416.2k VOTES List of the best Harem anime, voted on by Ranker's anime community. If you're not familiar with the harem genre, it usually ...
#13 of 21 The Best Anime Like Monster Musume 3.5k VOTES Also known simply as Monster Musume, the anime Monster Musume no Iru Nichijou centers on Kimihito Kurusu, who finds himself ...
#12 of 19 The Best Anime Like Demon King Daimao 1.6k VOTES Also known as Demon King Daimao, the TV anime Ichiban Ushiro No Daimaou adapts the first five volumes of the light nove...
#6 of 20 The Best Anime Like Heaven's Lost Property 624 VOTES For anime similar to Heaven's Lost Property, there are a number of titles to choose from. The following list ranks the ...
#3 of 13 The 13 Best Anime Like Baka and Test 451 VOTES Comedy anime series will always have a special place in the hearts of otaku's everywhere; they always have a way of getting ...
#8 of 13 The Best Anime Like Sarazanmai 63 VOTES Being in 8th grade is already a strange time in anyone's life, but could you imagine being turned into a Kappa during all of...