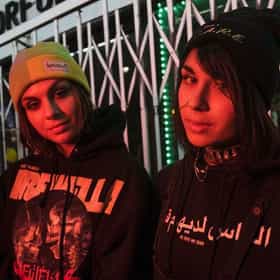 Krewella is an American electronic dance music duo from Chicago, Illinois, that formed in 2007. The duo consists of sisters Jahan Yousaf and Yasmine Yousaf. Originally a trio, their third member and producer Kristopher "Rain Man" Trindl resigned in 2014. Their EP, Play Hard was released on June 18, 2012 exclusively on Beatport followed by an iTunes release on June 26, 2012. Their debut album, Get Wet, was released on September 24, 2013 on iTunes. Their musical style draws upon house, dubstep, hardstyle, techno and drum and bass. Krewella is managed by Jake Udell and Nathan Lim of TH3RD BRAIN Management. ... more on Wikipedia

Krewella is ranked on...