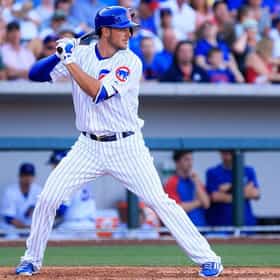 Kristopher Lee Bryant (born January 4, 1992) is an American professional baseball third baseman and outfielder for the Chicago Cubs of Major League Baseball (MLB). Prior to playing professionally, Bryant attended the University of San Diego, where he played college baseball for the Toreros. Bryant starred in baseball for Bonanza High School. In college, he was named an All-American in 2012 and 2013, and won the Dick Howser Trophy and Golden Spikes Award in 2013. The Cubs selected him with the second overall selection in the 2013 MLB draft and he quickly became one of the top prospects in baseball, winning the USA Today Minor League Player of the Year Award and Baseball America Minor ... more on Wikipedia

Kris Bryant is ranked on...

#317 of 620 The Greatest Baseball Players Of All Time 515.9k VOTES This greatest baseball players list represents the combined lists of baseball fans everywhere. Anyone can make their own lis...
#23 of 286 The Top Current Baseball Players 219.5k VOTES Who do you think should make the list of the best current players in baseball? Ranked by fans, critics, and sports analysts,...
#43 of 122 The Greatest Third Basemen of All Time 35.4k VOTES The greatest third basemen of all time include some veteran MLB players, many of whom are considered among the greatest base...
#12 of 48 Who Will Win the 2019 National League MVP? 2.6k VOTES The race for 2019 National League MVP is stacked. With Bryce Harper and J.T. Realmuto jumping ship to the Philadelphia Phill...
#86 of 202 The All-Around Best Athletes of 2018 32.9k VOTES When it comes to being an all-around best athlete, you're not just talking about the leading scorers of all time, or th...
#55 of 56 Athletes Who Won MVP Before Turning 25 700 VOTES Sports may be the domain of the young, but even the best athletes still need time to mature once they turn pro. However, the...
#20 of 50 The 50 Most Valuable MLB Players For Fantasy Baseball In 2019 4.1k VOTES Opening Day 2019 is around the corner, and while MLB managers focus on setting their roster and choosing an opening day...
#7 of 48 Every Athlete On The Scott Boras Client List, Ranked 610 VOTES Scott Boras is one of the top sports agents in the world, and all Boras Corporation clients have already proved something by...
17 Angry MLB Players React To The Astros Cheating Scandal 343 VIEWS The hot topic at spring training for the 2020 MLB season was obviously the Houston Astros sign-stealing scandal, and in thei...