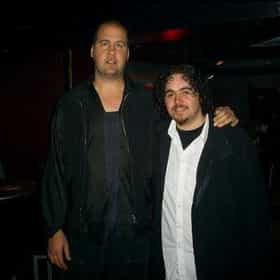 Krist Anthony Novoselic (; Croatian: Krist Novoselić; born May 16, 1965) is an American musician and political activist, best known as the bassist and a founding member of the grunge band Nirvana. Nirvana achieved massive success, earning multiple gold and platinum awards and touring around the world at sold-out shows.After Nirvana disbanded following the death of its frontman Kurt Cobain in 1994, Novoselic formed Sweet 75 in 1995 and Eyes Adrift in 2002, releasing one album with each band. From 2006 to 2009, he played in the punk rock band Flipper, and in 2011, he contributed bass and accordion to the song "I Should Have Known" on the Foo Fighters' studio album Wasting ... more on Wikipedia

Krist Novoselic is ranked on...

#110 of 113 The Most Influential Contemporary Americans 142.1k VOTES A list of the Americans who have had the most central influence on, or importance to, the modern era. This would include Ame...
#17 of 22 Pop Stars' Most Embarrassing On-Stage Moments 2.5k VOTES When you're a performer doing hundreds of shows a year, mistakes are bound to happen. And the headlining acts on this list o...
#6 of 15 Rock Stars of the 1990s: Where Are They Now? 4.5k VOTES We all remember riding around on hot summer days, rocking out to bands like Sugar Ray and Creed. But now we're older, and wh...
75+ Celebrities Who Fight for Animal Rights 73.5k VIEWS Many famous actors, musicians, and professional athletes fight for animal rights. Some are board members of organizations li...

Krist Novoselic is also found on...