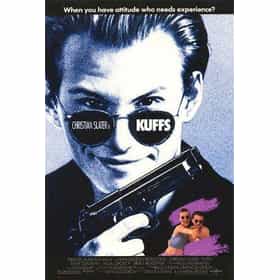 Kuffs is a 1992 action-comedy film directed by Bruce A. Evans and produced by Raynold Gideon. It stars Christian Slater and Tony Goldwyn. The film also features Milla Jovovich as well as Ashley Judd in her first movie role. The film was written directly for the screen by Evans and Gideon, both of whom had Slater in mind for the title role. The original music score is by Harold Faltermeyer. The film is set in, and was filmed around, San Francisco, California in 1991. It involves a type of law enforcement unique to San Francisco: the Patrol Special police franchises. Tagline: When you have attitude who needs experience? ... more on Wikipedia

Kuffs is also found on...