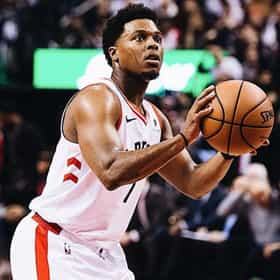 Kyle Terrell Lowry (born March 25, 1986) is an American professional basketball player for the Toronto Raptors of the National Basketball Association (NBA). With the Raptors, he has been a five-time NBA All-Star and was named to the All-NBA Third Team in 2016. Lowry won an NBA championship with Toronto in 2019, their first title in franchise history. He was a member of the U.S. national team that won a gold medal in the 2016 Summer Olympics. Lowry played two seasons of college basketball with the Villanova Wildcats before he was selected by the Memphis Grizzlies in the first round of the 2006 NBA draft with the 24th overall pick. He began his NBA career with Memphis and the Houston ... more on Wikipedia

Kyle Lowry is ranked on...

Kyle Lowry is also found on...