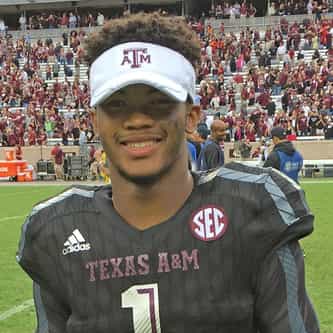 Kyler Cole Murray (born August 7, 1997) is an American football quarterback for the Arizona Cardinals of the National Football League (NFL). He previously played college football for the Texas A&M Aggies and Oklahoma Sooners. He also played as an outfielder for the Oklahoma Sooners baseball team. He won the 2014 Gatorade Football Player of the Year award as a senior in high school, and the Associated Press College Football Player of the Year, Davey O'Brien Award, and Heisman Trophy ... more on Wikipedia

Kyler Murray IS LISTED ON