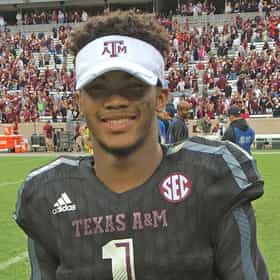 Kyler Cole Murray (born August 7, 1997) is an American football quarterback for the Arizona Cardinals of the National Football League (NFL). He previously played college football for the Texas A&M Aggies and Oklahoma Sooners. He also played as an outfielder for the Oklahoma Sooners baseball team. He won the 2014 Gatorade Football Player of the Year award as a senior in high school, and the Associated Press College Football Player of the Year, Davey O'Brien Award, and Heisman Trophy awards for his 2018 season with Oklahoma, in addition to numerous others. He was drafted first overall by the Cardinals in the 2019 NFL Draft, as well as ninth overall by the Oakland Athletics in the ... more on Wikipedia

Kyler Murray is ranked on...