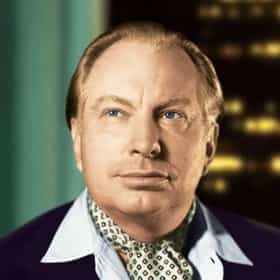 Lafayette Ronald Hubbard ( HUB-ərd;  March 13, 1911 – January 24, 1986) was an American author of science fiction and fantasy stories, and the founder of the Church of Scientology. In 1950, Hubbard authored Dianetics: The Modern Science of Mental Health and established a series of organizations to promote Dianetics. In 1952, Hubbard lost the rights to Dianetics in bankruptcy proceedings, and he subsequently founded Scientology. Thereafter Hubbard oversaw the growth of the Church of Scientology into a worldwide organization. Hubbard was cited by Smithsonian magazine as one of the 100 most significant Americans of all time.Born in Tilden, Nebraska, in 1911, Hubbard spent much of his ... more on Wikipedia

L. Ron Hubbard is ranked on...

#5 of 102 The Lamest Authors of All Time 71.4k VOTES There are always going be writers (and books) some folks just don't like. Books, and the skills of the people who write th...
Los Angeles Has A History With The Occult Unlike Any Other U.S. City 120.1k VIEWS Southern California is as far as you can get in the contiguous United States from the puritanical roots, restrictive so...
80 Famous Military Brats 229.4k VIEWS List of Famous Military Brats ranked by fame and popularity. A military brat is a nickname used to describe the children of ...
Famous People You Didn't Know Were Boy Scouts 220.7k VIEWS A list of famous people who were real-life scouts. This crowdranked list includes celebrities, politicians and other notab...
Famous Men With At Least 4 Kids 152.3k VIEWS This list features information on celebrities with four kids or more. If you’ve ever wondered, “Which celebrity has the most...