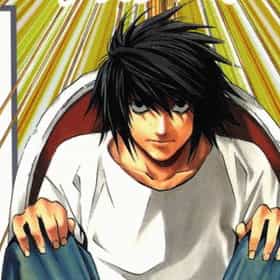 L Lawliet, exclusively known by the mononym L, is a fictional character in the manga series Death Note, created by Tsugumi Ohba and Takeshi Obata. He is an eccentric genius and international private detective, reputed to be the world's greatest, who takes on cases that have stymied national governments and Interpol. He opposes the series' protagonist Light Yagami by trying to prove that Light is the mass-murderer called "Kira" who is attempting to create and rule a world "cleansed of evil" as "God". L often uses dramatic strategies to confuse his opponents and force their hand. He eats sweet things exclusively, and is usually seen eating fruit or cake, or ... more on Wikipedia

#296 of 309 The Greatest Cartoon Characters in TV History 834.1k VOTES Throughout the annals of TV history, cartoon stars have shone brightly, bringing joy to children and adults alike....
#31 of 119 The 40+ Best Anime Character Backstories 182k VOTES If you watch a lot of anime, you know almost every anime character has some kind of backstory. That being said, what are the...
#124 of 374 The Most Powerful Anime Characters of All Time 1.1M VOTES Want to end the debate of who the strongest anime character to ever exist is? You only have to do one thing...vote on the po...
#212 of 222 The Saddest Television Deaths Ever 1.7M VOTES Spoilers everywhere, of course! List of the saddest TV deaths as voted and ranked by fans. TV shows have long been able to p...
#17 of 103 The Funniest Anime Characters of All Time 131.3k VOTES With all the fighting that goes on in shonen anime, it's sometimes refreshing to have a characters offer up some laughs. Who...
#6 of 107 The 25+ Saddest Anime Deaths of All Time 332.6k VOTES It's inevitable in almost any show you watch, but what are the saddest anime deaths of all time? For this list we're ranking...
#4 of 119 People who voted for L... People in the Midwest are 2x more likely to vote for this People in the Northeast are 3x more likely to vote for this 50+ Anime Characters Who Deserve Their Own Show 226.4k VOTES Which anime characters deserve their own show where they're the sole protagonist? Since there are so many worthy characters,...
#1 of 72 The Nerdiest Anime Characters of All Time 22.1k VOTES For this poll we're ranking the nerdiest anime characters of all time, but don't be surprised to see some entries that might...
#18 of 36 Anime Characters You'd Most Want to Get Drunk With 18.9k VOTES The world of anime has a wide spectrum of various character types, whether it's an action series with strong heroe...
#12 of 25 The Best Anime Character Theme Songs 24.3k VOTES One of the pros of watching anime rather than reading manga is the music. There are so many epic anime character themes out ...
#1 of 15 15 Celibate Anime Heroes Who Have No Interest In Getting Laid 3.1k VOTES Sex is a universal human desire, right? Actually, that's not true. Some people - and some anime characters - just don't...
#2 of 14 14 Anime Characters Who Are Extreme Introverts 6.3k VOTES Broadly speaking, an introvert is someone who finds social interaction draining, and who feels refreshed after spending...
#10 of 15 The 15 Best Anime Bosses You Would Totally Work For 2.7k VOTES When it comes to fictional bosses, most of them feel more villainous than virtuous, at least towards the protagonists. Perha...
#21 of 39 The Best Anime Characters with Spiky Hair 13.9k VOTES How many anime characters with spiky hair can you name? This list ranks the best spiky haired anime characters, with the hel...