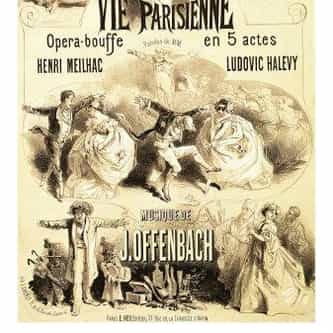 La vie parisienne is an opéra bouffe, or operetta, composed by Jacques Offenbach, with a libretto by Henri Meilhac and Ludovic Halévy. This work was Offenbach's first full-length piece to portray contemporary Parisian life, unlike his earlier period pieces and mythological subjects. It became one of Offenbach's most popular operettas. In 1864 the Théâtre du Palais-Royal presented a comedy by Meilhac and Halévy entitled Le Photographe, which featured a ... more on Wikipedia

La vie parisienne IS LISTED ON