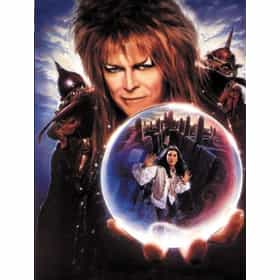 Labyrinth is a 1986 British-American musical adventure fantasy film directed by Jim Henson, executive produced by George Lucas and based upon conceptual designs by Brian Froud. The film stars David Bowie as Jareth and Jennifer Connelly as Sarah. The plot revolves around 15 year old Sarah's quest to reach the center of an enormous otherworldly maze to rescue her infant brother Toby, who has been taken by Jareth, the Goblin King. With the exception of Bowie and Connelly, most of the significant characters in the film are played by puppets produced by Jim Henson's Creature Shop. Labyrinth started as a collaboration between Jim Henson and Brian Froud. ... more on Wikipedia

'Labyrinth' Is Actually A Dark Psychosexual Fantasy When You Think About It 97.2k views A rich fantasy story, a girl in trouble, Muppets full of sorrow, and David Bowie - what could go wrong? Labyrinth is one ...
Get Lost In The Best Quotes From 'Labyrinth' 183 votes The best Labyrinth quotes make you realize how great the movie really is, even if you haven't seen it in a while. Let's rank...

Labyrinth is ranked on...

Labyrinth is also found on...