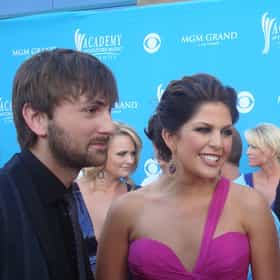 Lady Antebellum is an American country music group formed in Nashville, Tennessee in 2006. The group is composed of Hillary Scott (lead and background vocals), Charles Kelley (lead and background vocals, guitar), and Dave Haywood (background vocals, guitar, piano, mandolin). Scott is the daughter of country music singer Linda Davis, and Kelley is the brother of pop singer Josh Kelley. The group made its debut in 2007 as guest vocalists on Jim Brickman's single "Never Alone", before signing to Capitol Nashville. Lady Antebellum has released six albums for Capitol: Lady Antebellum, Need You Now, Own the Night, Golden, 747, and Heart Break, plus one Christmas album (On This ... more on Wikipedia

Lady Antebellum is ranked on...

#742 of 2,187 The Greatest Musical Artists of All Time 13.4M VOTES When VH1 polled fellow artists to name the greatest artists of all time, it seemed like a good idea---but in reality, the li...
#112 of 334 The Top Country Artists of All Time 198.3k VOTES One of the most distinct and popular American art forms is country music. The origins of country music began in mostly rural...
#91 of 1,069 The Worst Bands of All Time 1.3M VOTES The worst bands in music history, ranked by music fans (and haters.) This list contains the most awful bands to listen to fr...
#101 of 104 People We Loved to Hate in 2012 12.4k VOTES People we loved to hate in 2012 include popular names in sports, entertainment, and, of course in an election year, politics...
#8 of 20 Musicians Whose ACM Award Wins Boosted Their Careers 13.6k VOTES The Academy of Country Music Awards can play a very important role in shaping an artist's career. With a victory, millions u...
#16 of 28 The Best Artists to Win an ACM Award 3.8k VOTES If you're familiar with country music, then you should know how important the ACM Awards are to a country singer's career. A...
#8 of 75 The Best Musical Guests on 'The Late Show with Stephen Colbert' in 2019 853 VOTES Update - Check out the musical guests on Colbert in 2020! This list contains videos and information about the 2019 musical...
#221 of 322 The Best Pop Rock Bands & Artists 1G VOTES Over the years, pop rock has come to dominate the radio waves. Mixing a catchy pop sound with light (read: not serious) lyri...
Every Band & Musician Who Has Performed on Saturday Night Live 104.7k VIEWS Live from the main stage at 30 Rockefeller Plaza, this is a list of every band, musician, and singer who has performed on Sa...
22 Musicians Who Sold Ad Space in Their Lyrics 6.9k VIEWS Which musicians are total sellouts? Just look at their lyrics! You will likely find that: if it's time for a party, bring ou...

Lady Antebellum is also found on...