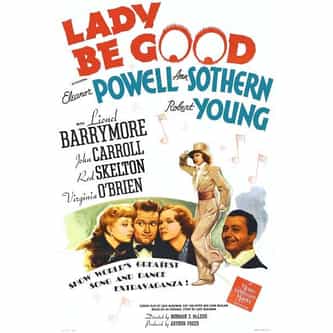 Lady Be Good is the title of an MGM musical film which was released in 1941. The film starred dancer Eleanor Powell, along with Ann Sothern, Robert Young, Lionel Barrymore, and Red Skelton. It was directed by Norman Z. McLeod and produced by Arthur Freed. This was the first of several films Powell made with Skelton. Although Powell received top billing, the main stars of the film are Sothern and Young. They play respectively Dixie Donegan, a would-be lyric writer and Eddie Crane, a ... more on Wikipedia

Lady Be Good IS LISTED ON