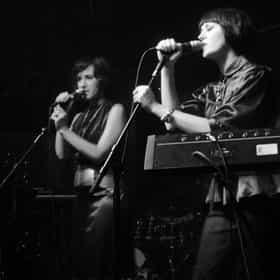 Ladytron are an electronic band formed in Liverpool in 1999. The group consists of Helen Marnie, Mira Aroyo, Daniel Hunt and Reuben Wu. Their sound blends electropop with new wave and shoegazing elements. Ladytron described their sound as "electronic pop". Some of the group's songs performed by Aroyo contain lyrics written in her native Bulgarian. Their name was taken from the song "Ladytron" by Roxy Music. According to Brian Eno, once a member of Roxy Music, Ladytron are "the best of English pop music". Ladytron have released five studio albums so far: 604, Light & Magic, Witching Hour, Velocifero and Gravity the Seducer. They also issued the live ... more on Wikipedia

Ladytron is ranked on...

Ladytron is also found on...