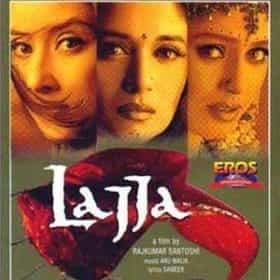 Lajja is a 2001 Hindi drama film directed by Rajkumar Santoshi. The film is based on the plight of women in India. The movie recounts the story of four women, and stars some of the best known names in Hindi cinema, including Manisha Koirala, Rekha, Madhuri Dixit, Mahima Chaudhry, Jackie Shroff, Johnny Lever, Anil Kapoor, Samir Soni, Ajay Devgan and Danny Denzongpa. Urmila Matondkar and Sonali Bendre perform item numbers. The movie satirizes the honour with which women are placed in society and the restrictions on them. The fact that the four women's names are all versions of Sita, the ideal Hindu woman's name, is a message in itself. Manisha Koirala is the protagonist of this film. The ... more on Wikipedia

Lajja is ranked on...