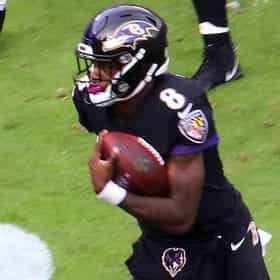 Lamar Demeatrice Jackson Jr. (born January 7, 1997) is an American football quarterback for the Baltimore Ravens of the National Football League (NFL). He played college football at Louisville and was selected 32nd overall by the Ravens in the first round of the 2018 NFL Draft. At Louisville, Jackson won the Heisman Trophy, Maxwell Award, and Walter Camp Award and was a unanimous All-American as a sophomore in 2016. On January 5, 2018, Jackson officially announced that he would be entering the 2018 NFL Draft. Jackson was drafted by the Baltimore Ravens in the first round with the 32nd overall pick in the draft, who traded up for the selection with the Philadelphia Eagles. He was the ... more on Wikipedia

Lamar Jackson is ranked on...

#15 of 51 The Most Likable Active NFL Players 2.4k VOTES Are you ready for some (very nice) football! Even though football is a gritty game of tough competitors, the sport is filled...
#5 of 119 The Greatest College Football Quarterbacks of All Time 37.7k VOTES Who is the best college quarterback ever? Who are the greatest college quarterbacks of all time?There have been many great c...
#3 of 63 Every Quarterback To Achieve A Perfect Passer Rating 5.9k VOTES All 60 quarterbacks to achieve a perfect passer rating have had at least one day when they were on top of the football world...
#8 of 30 The Best Black Quarterbacks Of All Time 1.7k VOTES Many of the best black quarterbacks of all-time are in the league right now. In 2019, we are in what appears to be the ...
#36 of 41 The 41 Hottest Men in the NFL 165.3k VOTES   The hottest current NFL players include some of the hottest athletes of all time that are currently playi...
#45 of 68 The Best NFL Quarterbacks of the 2010s 28.1k VOTES These are the best quarterbacks of the 2010s. Quarterbacks are the heart of any football team. The best NFL quarterbacks are...
#22 of 90 The All-Around Best Athletes of 2019 8.4k VOTES Do you know who is the best all-around athlete of 2019? We are not just talking about offensive powerhouses but players that...
#1 of 108 The Coolest Players in the NFL Right Now, Ranked 4.4k VOTES The coolest players in the NFL currently are not necessarily the biggest stars. Many of these players could be considered am...
#1 of 21 The Best Baltimore Ravens Quarterbacks of All Time 4.5k VOTES Big fan of Baltimore football? Then check out this list of Baltimore Ravens quarterbacks with photos! It includes every star...
#1 of 45 Who Will Win The 2019 NFL MVP Award? 3.3k VOTES Every 2019 NFL MVP award candidate is looking to leave his mark on the football world. And the top NFL MVP award candidates ...
#9 of 35 Who Will Win the 2018 NFL Rookie of the Year ? 38.3k VOTES UPDATE: Head over and make your 2019 NFL Rookie of the Year predictions. With every NFL season, you have plenty of new fac...
#3 of 24 The Best Baltimore Ravens First-Round Picks In The NFL Draft 309 VOTES The Baltimore Ravens' first-round draft picks have been a tremendous success from the start. In fact, the first two Ravens d...
#2 of 37 The Best Fantasy Football Quarterbacks Of 2019 231 VOTES The top fantasy quarterbacks in 2019 include a combination of new stars taking over the NFL and legends in the lat...
#4 of 50 The Best Athletes Who Wore #8 665 VOTES The best players to wear 8 as their jersey numbers are sprinkled across all major sports. It has been a popular jersey numbe...