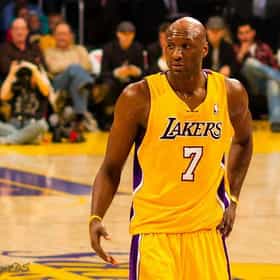 Lamar Joseph Odom (born November 6, 1979) is an American professional basketball player. As a member of the Los Angeles Lakers in the National Basketball Association (NBA), he won NBA championships in 2009 and 2010 and was named the NBA Sixth Man of the Year in 2011. As a high school player, Odom received national player of the year honors from Parade in 1997. He played college basketball for the University of Rhode Island, earning all-conference honors in his only season in the Atlantic 10 Conference. He was drafted in the first round of the 1999 NBA draft with the fourth overall pick by the Los Angeles Clippers. He was named to the NBA All-Rookie Team, but twice he violated the ... more on Wikipedia

Lamar Odom is ranked on...

Lamar Odom is also found on...