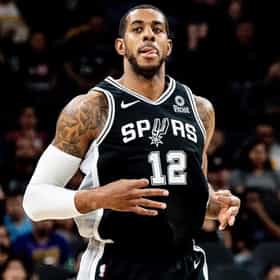 LaMarcus Nurae Aldridge (born July 19, 1985) is an American professional basketball player for the San Antonio Spurs of the National Basketball Association (NBA). The power forward played college basketball for two seasons with the Texas Longhorns. Aldridge was selected second overall in the 2006 NBA draft. After spending nine seasons with the Portland Trail Blazers, he signed with the Spurs in 2015. He has been selected to five All-NBA teams and is a seven-time NBA All-Star. He is widely known for his signature fadeaway jump shot. ... more on Wikipedia

LaMarcus Aldridge is ranked on...

LaMarcus Aldridge is also found on...