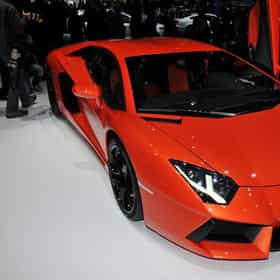 The Lamborghini Aventador is a mid-engined sports car produced by the Italian manufacturer Automobili Lamborghini. Launched on 28 February 2011 at the Geneva Motor Show, five months after its initial unveiling in Sant'Agata Bolognese, the vehicle, internally codenamed LB834, was designed to replace the ten-year-old Murciélago as the new flagship model. Soon after the Aventador unveiling, Lamborghini announced that it had already sold over 12 of the production vehicles, with deliveries starting in the second half of 2011. ... more on Wikipedia

Lamborghini Aventador is ranked on...

#5 of 255 The Ultimate Dream Garage 123.1k VOTES As car lovers, we all have a list of cars we'd love to someday own. Our "dream garage". These automobiles are not ...
#3 of 56 Dream Cars You Wish You Could Afford Today 8.4k VOTES Material possessions aren't everything in life, but everyone has a list of dream cars in their head. This is a list of all t...
#8 of 25 The Best Midsize Family Sedans 7.1k VOTES This is a collection of the best midsize family sedans. We created this list based on information from multiple sources as w...
#2 of 20 20 Snazzy Cars Most Preferred by Celebrities 2.2k VOTES The lifestyles of the rich and famous seem to include all the finest things - especially fast, sexy cars. There was a time b...
Cars Owned By Justin Bieber That He's Probably Only Driven Once 12.8k VIEWS Why anyone would let Justin Bieber behind the wheel of a car is beyond comprehension. Time after time, the least and most lo...

Lamborghini Aventador is also found on...