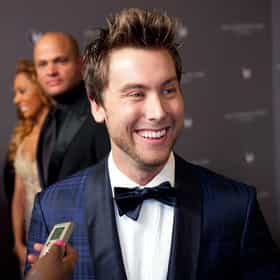 James Lance Bass (; born May 4, 1979) is an American singer, dancer, actor, film and television producer, and author. He grew up in Mississippi and rose to fame as the bass singer for the American pop boy band NSYNC. NSYNC's success led Bass to work in film and television. He starred in the 2001 film On the Line, which his company, Bacon & Eggs, also produced. Bass later formed a second production company, Lance Bass Productions, as well as a now-defunct music management company, Free Lance Entertainment, a joint venture with Mercury Records.After completion of NSYNC's PopOdyssey Tour, Bass moved to Star City, Russia, in much publicized pursuit of a seat on a Soyuz space capsule. ... more on Wikipedia

The Story Of The Time Lance Bass Tried To Go To Space 52.4k views The early 2000s were ridiculous, and our memories often betray us when it comes to remembering just how insane the beginning...
Lance Bass's Loves & Hookups 19.5k views Who is Lance Bass dating? Who Lance Bass dated; list of Lance Bass loves, ex boyfriends; breakup rumors. The loves and relat...

Lance Bass is ranked on...

#131 of 276 The Most Trustworthy Celebrities in the World 772.7k VOTES Trust: the belief that someone or something is reliable, good, honest, effective, etc. When it comes to celebrities, do any ...
#40 of 65 The Greatest Dancing Singers 119k VOTES We know them for their lyrical talent (or lack of) but the real question is, can they bust a move? The best singers aren't a...
#13 of 32 People who voted for Lance Bass... People in the Midwest are 2x more likely to vote for this 32 Celebrities Who Have Insane Phobias 106.8k VOTES What are you afraid of? The dark? Failure? Death? Well, you'll feel a hundred times better about yourself when you see some ...
#162 of 184 Celebrities You Feel Like You Know 22.4k VOTES Everyone has a favorite celebrity who they think just gets them. You know, those celebrities you feel like you know. Wheth...
#31 of 35 Famous People with Literal (and Hilarious) Names 2.4k VOTES When people have funny names that relate to the things they do in life, it is called an aptronym. From Tim Duncan who is alw...
#105 of 127 People who voted for Lance Bass... also upvote Fly on Incredible '90s Slang You (Almost) Forgot About are 21x more likely to vote for 'N Sync on this list The Greatest '90s Teen Stars 315.2k VOTES The greatest teen stars of the '90s are well-remembered on this countdown. They were everywhere – they ruled the box office,...
#45 of 66 People who voted for Lance Bass... are 25x more likely to vote for Ricky Martin on this list The Greatest Gay Icons in Music 55.3k VOTES List of the Greatest Gay Icons in Music, ranked by fans. Gay icons come in all shapes and sizes. Some are fiercely bold diva...
#33 of 45 '90s Celebrities You Should Be Following on Instagram 3.2k VOTES You knew them, you loved them, and back in the day, many of them were your first crushes. But great news! These icons from...
#10 of 10 Would You Still Hook Up With Your '90s Boy Band Crush Now That He's A Grown Man? 2.5k VOTES Forget One Direction. The 90s had a bevy of boy band stars that captured the crush-worthy attention of many a tween and teen...
#47 of 55 Celebrities You'd Want To Go To Vegas With 6.8k VOTES While Las Vegas is certainly not for everybody, when you go with the right people, especially a well-connecte...
#22 of 25 25 Celebrities That Gave Us Douche Chills With Their Frosted Tips 6k VOTES When it comes to embarrassing hair trends, few among the atrocities of 90s hair can compare to the horrors that we...
#4 of 5 Every Member of NSYNC, Ranked Best to Worst 1.3k VOTES   You know their songs. You've attempted their dance moves. Now it's time to decide: who's the coolest, hottest, and a...
#88 of 100 The Best Musical Artists From Mississippi 1k VOTES Here are the best artists and bands from Mississippi. A largely rural state primarily known for the massive river beari...
#62 of 140 The Best LGBTQ+ Musicians 16.7k VOTES The LGBTQ+ community has long been celebrated within the music industry, as some of the biggest stars of the late 20th centu...
50+ Celebrities Who Were in School Choir 109.8k VIEWS This list of celebrities who were in choir is loosely ranked by fame and popularity. Several famous musicians, actors, polit...
Celebrities Who Have Starred on Broadway 12.4k VIEWS Most actors don't just stick to the screen. What celebrities have also been in Broadway plays? The celebrities on this list,...
#73 of 273 The Best Dance-pop Artists 22.3k VOTES Dance-pop artists list, with photos, ranked best to worst by votes. List of good dance-pop bands includes a filter so you ca...
The Most Embarrassing Celebrity Yearbook Photos 2.6M VIEWS List of the best celebrity yearbook photos. The biggest names in Hollywood, including George Clooney, Oprah Winfrey, Brad Pi...
Famous People Named Lance 7.4k VIEWS List of famous people named Lance, along with photos. How many celebrities named Lance can you think of? The famous Lances b...
All The Celebrity Men Danielle Fishel Has Dated 1.2k VIEWS Danielle Fishel is most known for her role as Topanga in Boy Meets World. Since she was such a hearthrob in the show, many a...
34 Gay Stars Who Came Out to the Media 171.1k VIEWS Many queer celebrities choose to come out to the mainstream media. Some release official statements while others hold e...
Celebrities Who Secretly Do A Ton Of Charity Work 569.2k VIEWS   Despite their fame, wealth, and packed schedules, many benevolent celebrities like to pay it forward by helping oth...
39 Gay Celebrities Who've Come Out Since 2000 4.4M VIEWS Gay, bisexual, lesbian, and transexual individuals started to gain more support in the 2000s. Gay actors, writers, and music...
What Celebrities Looked Like On TRL Vs. What They Look Like Today 951.8k VIEWS MTV's TRL is time capsule filled with overly straightened hair, low-rise jeans and Carson Daly's black painted nails (may th...
26 Famous Gay People Who Fight for Human Rights 160.8k VIEWS Several gay celebrities fight for causes that benefit human rights all over the world. Some famous gay people support causes...
Celebrities Who Had Their Appendix Removed 10.1k VIEWS An appendectomy is a common medical procedure, so it's no surprise there are so many famous people who had their appendix re...
Celebrities Born On Star Wars Day 608 VIEWS Here are all the famous people who were born on May 4th AKA Star Wars Day. Featuring actors, musicians, singers, a...

Lance Bass is also found on...