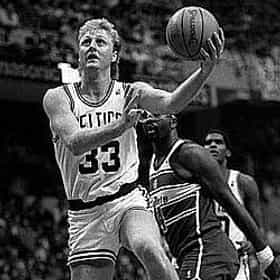 Larry Joe Bird (born December 7, 1956) is an American former professional basketball player, former coach, and former executive who most recently served as President of Basketball Operations for the Indiana Pacers in the National Basketball Association (NBA). Nicknamed "The Hick from French Lick," Bird is widely regarded as one of the greatest basketball players of all time. Drafted into the NBA by the Boston Celtics with the sixth overall pick in the 1978 NBA draft, Bird started at small forward and power forward for the Celtics for 13 seasons. Bird was a 12-time NBA All-Star and received the NBA Most Valuable Player Award three consecutive times (1984–1986). He played his ... more on Wikipedia

Larry Bird is ranked on...

Larry Bird is also found on...