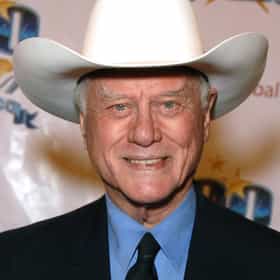 Larry Martin Hagman (September 21, 1931 – November 23, 2012) was an American film and television actor, director and producer best known for playing ruthless oil baron J.R. Ewing in the 1970s primetime television soap opera Dallas and befuddled astronaut Major Anthony "Tony" Nelson in the 1960s sitcom I Dream of Jeannie. Hagman had supporting roles in numerous films, including Fail-Safe, Harry and Tonto, S.O.B., Nixon and Primary Colors. His television appearances also included guest roles on dozens of shows spanning from the late 1950s until his death and a reprise of his signature role on the 2012 revival of Dallas. He also worked as a television producer and director. ... more on Wikipedia

Larry Hagman is ranked on...

#42 of 505 People who voted for Larry Hagman... also upvote Twilight Saga Franchise on The Worst Movies Of All Time also upvote Star Trek Franchise on The Greatest Sci-Fi Movies of All Time The Best TV Actors of All Time 109.7k VOTES The greatest TV actors of all time. Some of these actors have been in movies, some of them are even more well known at this ...
#969 of 2,003 The Greatest Actors & Actresses in Entertainment History 1.7M VOTES The best actors and actresses of all time, male and female, ranked by film fans worldwide. This list of greatest actors and ...
Celebrities Who Have Received Organ Transplants 646k VIEWS A list of famous people who have received organ transplants; celebrities who have been donated livers, kidneys, corneas an...
70+ Celebrities Who Have Almost Died 1.7M VIEWS Every day, people all over the world we never hear about are involved in incidents that could easily be fatal. The ones we d...
23 Famous Actors Who Started in Daytime Soaps 427.5k VIEWS This is a list of celebrities who started in daytime soap operas. Several Hollywood actors and actresses launched their care...
Famous Liver Transplant Recipients 43.8k VIEWS A list of famous liver transplant recipients. All types of celebrities have been included from the music industry, TV, film,...

Larry Hagman is also found on...