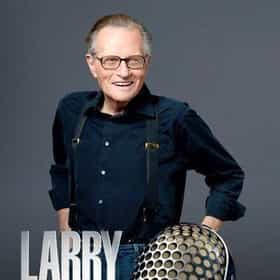 Larry King Live is an American talk show that was hosted by Larry King on CNN from 1985 to 2010. It was CNN's most watched and longest-running program, with over one million viewers nightly. Mainly aired from CNN's Los Angeles studios, the show was sometimes broadcast from CNN's studios in New York or Washington, D.C., where King gained national prominence during his years as a radio interviewer for the Mutual Broadcasting System. Every night, King interviewed one or more prominent individuals, usually celebrities, politicians and businesspeople. The one-hour show was broadcast three times a day in some areas, and was seen all over the world on CNN International. On June 29, 2010, King ... more on Wikipedia

Larry King Live is ranked on...