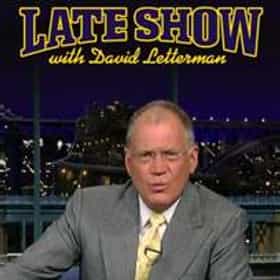 Late Show is an American late-night television talk and variety show on CBS. Late Show with David Letterman first aired in August 1993 with host David Letterman, who previously hosted Late Night with David Letterman on NBC from 1982 to 1993. It is produced by Letterman's production company, Worldwide Pants, and CBS Television Studios. It originates from the Ed Sullivan Theater. In most U.S. markets the show airs from 11:35 p.m. to 12:37 a.m. Eastern and Pacific Time. On April 3, 2014, Letterman announced that he planned to retire in 2015. CBS announced Stephen Colbert as his successor soon after. CBS has confirmed that the new program will retain the Late Show name, and that it will ... more on Wikipedia

Late Show with David Letterman is ranked on...

#191 of 383 The Best TV Shows of The Last 20 Years 1.5M VOTES This best TV show list represents the combined opinions of thousands of TV fans. Anyone can vote on this list of the best TV...
#23 of 75 The Best CBS Shows of All Time 17.4k VOTES CBS: Everybody's watching! "America's Most Watched Network" is the home of modern TV favorites The Big Bang Theo...
#65 of 158 Shows with the Best Freakin' Series Finales of All Time 264.7k VOTES This list of the best series finales in television is a somber reminder that no matter how much you love a TV character or a...
#364 of 1,328 The Best Guilty Pleasure TV Shows 19.7k VOTES List of the best guilty pleasure TV shows, past and present, including sitcoms, dramas, reality shows, and game shows. These...
#38 of 39 The Funniest TV Shows of 2012 2.7k VOTES The funniest TV shows of 2012 allowed us to unwind after a long day with witty writing and belly busting laughs. These comed...
#16 of 31 What to Watch If You Love 'Jimmy Kimmel Live!' 69 VOTES Jimmy Kimmel Live! is a late night talk show hosted by one of the funniest comics on television that garnered the love and a...
#63 of 686 The Greatest Shows of the 1990s, Ranked 264.6k VOTES In the 1990s, television was one of the fastest growing mediums. More TV shows were popping up than ever before, and ratings...
#3 of 30 The Best Talk Shows of the 2000s 1.8k VOTES Talk shows have been a television staple for decades, and these are the best 2000s talk shows, ranked by fans. Some of these...
#4 of 10 The Best Late Night Talk Shows From NYC 28 VOTES New Yorkers have a lot to be proud of. Their city draws in tourists from all over the globe who want to visit the city that ...

Late Show with David Letterman is also found on...