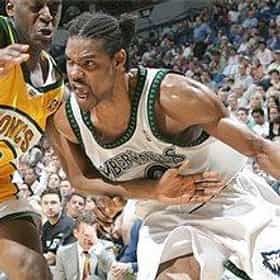 Latrell Fontaine Sprewell (born September 8, 1970) is an American former professional basketball player who played for the Golden State Warriors, the New York Knicks, and the Minnesota Timberwolves in the NBA. During his basketball career, Sprewell was named to the yearly NBA All-Star Game four times; he also helped the Knicks reach the NBA Finals and the Timberwolves the Western Conference finals. Despite his accomplishments, his career was overshadowed by a 1997 incident in which he choked coach P. J. Carlesimo during a practice, which ultimately resulted in a 68-game suspension. Sprewell's career came to an unexpected end in 2005 when he refused a $21-million three-year contract ... more on Wikipedia

Latrell Sprewell is ranked on...

Latrell Sprewell is also found on...