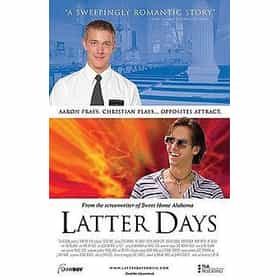 Latter Days is a 2003 American romantic comedy-drama film about a gay relationship between a closeted Mormon missionary and his openly gay neighbor. The film was written and directed by C. Jay Cox and stars Steve Sandvoss as the missionary, Aaron, and Wes Ramsey as the neighbor, Christian. Joseph Gordon-Levitt appears as Elder Ryder, and Rebekah Johnson as Julie Taylor. Mary Kay Place, Erik Palladino, Amber Benson, and Jacqueline Bisset have supporting roles. Latter Days premiered at the Philadelphia International Gay & Lesbian Film Festival on July 10, 2003 and was released in various states of USA over the next 12 months. Later the film was released in a few other countries and ... more on Wikipedia

Latter Days is ranked on...

Latter Days is also found on...

List of All Romantic Comedy Movies Romance Movies and Films Gay Movies: List of All Gay Films Movies Distributed by TLA Releasing Films List of All Movies Released in 2003