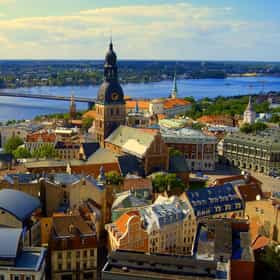 Latvia, is a country in the Baltic region of Northern Europe, one of the three Baltic states. It is bordered by Estonia, Lithuania, Russia, and Belarus, as well as a maritime border to the west with Sweden. Latvia has 2,070,371 inhabitants and a territory of 64,589 km² (24,938 sq mi). The country has a temperate seasonal climate. Latvia is a democratic parliamentary republic established in 1918. The capital city is Riga, the European Capital of Culture 2014. Latvian is the official language. Latvia is a unitary state, divided into 118 administrative divisions, of which 109 are municipalities and 9 are cities. Latvians and Livs are the indigenous people of Latvia. Latvian is an ... more on Wikipedia

The Best Latvian Jokes 2.3k votes “What is Latvian joke?” You might be asking, hoping you’re not speaking to politburo. Latvian jokes are short examinations a...
The Best Tennis Players from Latvia 90 votes List of the best tennis players from Latvia, listed by popularity with photos of the players when available. Latvia has prod...

Latvia is ranked on...

Latvia is also found on...