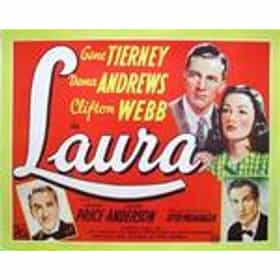 Laura is a 1944 American film noir produced and directed by Otto Preminger. It stars Gene Tierney, Dana Andrews, and Clifton Webb along with Vincent Price and Judith Anderson. The screenplay by Jay Dratler, Samuel Hoffenstein, and Betty Reinhardt is based on the 1943 novel of the same title by Vera Caspary. In 1999, Laura was selected for preservation in the United States National Film Registry by the Library of Congress as being "culturally, historically, or aesthetically significant". ... more on Wikipedia

Laura is ranked on...

Laura is also found on...