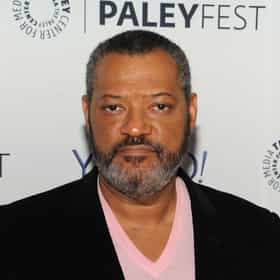 Laurence John Fishburne III (born July 30, 1961) is an American actor, playwright, producer, screenwriter, and film director. He is known for playing Morpheus in The Matrix trilogy, Jason "Furious" Styles in the 1991 drama film Boyz n the Hood, Tyrone "Mr. Clean" Miller in the 1979 war film Apocalypse Now, and most recently "The Bowery King" in the John Wick film series. For his portrayal of Ike Turner in What's Love Got to Do With It, Fishburne was nominated for an Academy Award for Best Actor. He won a Tony Award for Best Featured Actor in a Play for his performance in Two Trains Running (1992), and an Emmy Award for Outstanding Guest Actor in a Drama ... more on Wikipedia

Laurence Fishburne is ranked on...

#161 of 1,148 The Best Actors in Film History 2.2M VOTES The best actors ever are ranked here in this list of the best actors in film history. These are the greatest actors ever to ...
#163 of 282 The Best (Male) Actors Working Today 1.5M VOTES The best actors working today include Hollywood legends, Academy Award winners and many of the top up and coming actors in t...
#85 of 150 The All-Time Greatest Action Stars 309.5k VOTES Who are the all-time greatest action stars? This list includes some of the biggest names in movie history, and each actor or...
#91 of 532 The Best TV Actors of All Time 113k VOTES The greatest TV actors of all time. Some of these actors have been in movies, some of them are even more well known at this ...
#123 of 332 The Coolest Actors Ever 748k VOTES As movie fans, we like to think of our favorite actors as being larger than life. With all of the coverage that these stars ...
#222 of 2,003 People who voted for Laurence Fishburne... also upvote Morgan Freeman on The Best Actors Working Today also upvote Robert De Niro on The Best Actors Working Today The Greatest Actors & Actresses in Entertainment History 1.7M VOTES The best actors and actresses of all time, male and female, ranked by film fans worldwide. This list of greatest actors and ...
#112 of 258 The Best Marvel Movie Actors Ever 581.7k VOTES Ah Marvel movies. It began in 1944 with serialized films of Captain America and 70 years later, are one of the biggest, most...
#125 of 165 If You Fought To The Death, Who Would You Want By Your Side? 71.2k VOTES Fighting to the death. You know you’ve thought about it; pop culture has definitely made you consider it. In the e...
#596 of 1,452 Celebrity Death Pool 2018 477.7k VOTES Welcome to Celebrity Death Pool 2018! In increasingly uncertain times, there remains one constant in life - we all die. Cele...
#15 of 56 The Greatest Non-White Actors in Hollywood 3.7k VOTES With audiences pushing Hollywood towards increased diversity both on- and off-screen, now is the perfect time to celebrate t...
#4 of 30 30 Celebrities and Their Lookalikes of Other Races And/Or Ethnicities 802.7k VOTES Has anyone ever asked you if you and one of your friends are twins, even though you aren't related at all? Have you ever see...
#17 of 86 The Best Actors to Start Their Careers on Soaps 25.8k VOTES This is a list of the best actors to start their careers on soap operas, as voted on by experts and fans alike. Like th...
#8 of 30 Who Should Be in a Miles Morales Spider-Man Film? 3.1k VOTES With The Amazing Spider-Man 2 not being the be all end all Marvel Studios film success Sony needed it to be, the...
#6 of 14 Actors Whose Whole Thing Is Being Your Father 1.1k VOTES Unless you're going for that whole "rebellious teen thing," you never really want to let your dad down. ...
Celebrities Who Have Starred on Broadway 12.6k VIEWS Most actors don't just stick to the screen. What celebrities have also been in Broadway plays? The celebrities on this list,...
Actors Who Have Directed Films 12.2k VIEWS Several famous actors and actresses have directed films and many of their films have even gone on to win Academy Awards. A f...
Celebrities With Problem Children 4.4M VIEWS These celebrity problem children have taken misbehaving to the next level. The kids of celebrities don't have traditional ch...
Actors And Actresses Who Were Only A Couple Years Older Than The People Playing Their Kids 35.1k VIEWS Hollywood isn't known for being particularly concerned with realism. This is manifested in a variety of ways, especially&nbs...
15 Celebrities Who Totally Lied About Their Age 38k VIEWS Given that they're living under the intense scrutiny of the public eye, it's only natural that some famous people have chose...
100 Film and TV Celebs Who Have Also Starred on Broadway 15.4k VIEWS Film and TV celebs who have also starred on Broadway are those actors and actresses who have seen success both on screen and...
Celebrities With Gap Teeth 619.9k VIEWS This is a list of famous people with gap teeth. These gap-toothed celebs have at least one thing in common: they love to smi...
23 Famous Actors Who Started in Daytime Soaps 427.7k VIEWS This is a list of celebrities who started in daytime soap operas. Several Hollywood actors and actresses launched their care...
20 Actors Who Have Played Othello 53.8k VIEWS Othello is one of William Shakespeare's most notable tragedies. It addresses themes of racism, love and betrayal that are as...
39 Famous Actors Who Won Tonys for Plays 3.2k VIEWS List of Famous Actors Who Won Tonys for Plays ranked by fame and popularity. Several famous Hollywood actors have won Tony A...

Laurence Fishburne is also found on...