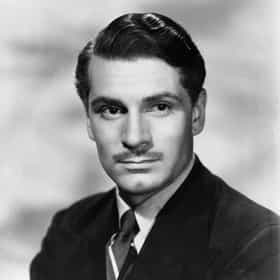 Laurence Kerr Olivier, Baron Olivier, (; 22 May 1907 – 11 July 1989) was an English actor and director who, along with his contemporaries Ralph Richardson, Peggy Ashcroft and John Gielgud, dominated the British stage of the mid-20th century. He also worked in films throughout his career, playing more than fifty cinema roles. Late in his career, he had considerable success in television roles. His family had no theatrical connections, but Olivier's father, a clergyman, decided that his son should become an actor. After attending a drama school in London, Olivier learned his craft in a succession of acting jobs during the late 1920s. In 1930 he had his first important West End success in ... more on Wikipedia

Laurence Olivier is ranked on...

#1 of 273 The Greatest British Actors of All Time 285.2k VOTES This list of the greatest British actors of all time has been ranked by fans of the films and TV shows in which these men ha...
#202 of 428 The Hottest Male Celebrities 3.5M VOTES You love your boyfriend (husband? Lucky you!), but then there are these hot celebrity men. You see them and then you maybe f...
#104 of 783 The Greatest Directors In Movie History 305.1k VOTES List of the greatest directors in movie history, who are most deserving of Academy Awards and critical recognition. The list...
#6 of 2,003 People who voted for Laurence Olivier... People over 50 are 2x more likely to vote for this also upvote Tom Hanks on The Best Actors Working Today The Greatest Actors & Actresses in Entertainment History 1.7M VOTES The best actors and actresses of all time, male and female, ranked by film fans worldwide. This list of greatest actors and ...
#99 of 255 Actors You Would Watch Read the Phone Book 317.9k VOTES List of actors who you would watch do something as mundane as read the phone book. Some of these guys are leading men, consi...
#31 of 42 The Best Oscar Hosts Ever 16.7k VOTES Who are the best Oscar hosts of alltime? This is a list of Academy Awards emcees, with photos, voted on by Oscar fans worldw...
#5 of 44 The Best Actors Who Won an Oscar and a Golden Globe for the Same Performance 8.9k VOTES The Golden Globes and the Academy Awards don't always go hand in hand, whether its Best Picture, Best Director, or any of th...
#11 of 44 The Best Actors Who Won Razzies 34.3k VOTES Some of the best actors who won Razzies also won Academy Awards, proving that just because you're super-talented, you can oc...
The Locations of All Hollywood Walk of Fame Stars 418.7k VIEWS A list of stars on the Hollywood Walk of Fame, with photos. This list includes all television and movie stars. Acquiring a s...
Gay Celebrities Who Never Came Out 726.3k VIEWS This list contains information about gay celebrities who never came out, loosely ranked by fame and popularity. Many succe...
Famous People Who Have Been Knighted 751.2k VIEWS A list of famous people who have been knighted, ranked by fame and popularity by fans of British chivalry like you. Being kn...
Actors Who Have Played Hamlet 158.1k VIEWS Hamlet is one of William Shakespeare's most notable tragedies. Many famous actors have portrayed the complicated title chara...
And The (Honorary) Academy Award Goes To ... 284 VIEWS All honorary Oscar recipients have achieved the ultimate recognition in Hollywood. From the first ceremony in 1929, the Acad...
Famous People Named Laurence 1.6k VIEWS Who knew there were so many famous people named Laurence in the world? Our list of celebrities named Laurence includes pic...

Laurence Olivier is also found on...