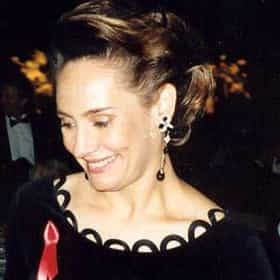 Laura Elizabeth Metcalf (born June 16, 1955) is an American actress. Over the course of her four-decade career, she has been the recipient of numerous acting awards and nominations. She has won three Primetime Emmy Awards, two Tony Awards, and has been nominated for an Academy Award. Metcalf began her career with the Steppenwolf Theater Company and frequently works in Chicago theater. For her stage performances and work on Broadway, Metcalf has received six Tony Award nominations, winning Best Actress in a Play in 2017 for her performance in A Doll's House, Part 2 and Best Featured Actress in a Play for the 2018 revival of Edward Albee's Three Tall Women. She gained national attention ... more on Wikipedia

Laurie Metcalf is ranked on...

#112 of 184 The Greatest Actresses Who Have Never Won an Oscar (for Acting) 68.3k VOTES There are many actresses who haven't won an Oscar. For 95 percent of the acting population, there is probably a good reason ...
#80 of 294 People who voted for Laurie Metcalf... People Age 30 to 49 are 3x more likely to vote for this also upvote Star Wars Franchise on The Best Movies of All Time The Funniest Female Comedians of All Time 255.7k VOTES The funniest female comedians star on our favorite sitcoms, perform standup at the top comedy clubs and best of all, make us...
#30 of 48 The Best SNL Cast Members of the '80s 5k VOTES Ah, the legendary '80s of Saturday Night Live. Lorne Michaels left in 1980 and took a chunk of the cast and writers with h...
#19 of 22 The Best One Season SNL Cast Members 3k VOTES There are essentially three reasons a cast member stayed for only one season on Saturday Night Live: they already had a ca...
#23 of 43 The Funniest Female SNL Alumni 22.9k VOTES List of the funniest women to ever be on Saturday Night Live, as ranked by SNL fans and critics. In the history of SNL there...
#2 of 5 All the 2018 Oscar Nominees for Best Supporting Actress, Ranked 402 VOTES The Best Supporting Actress nominees are finally here! Each year, a host of talented actresses are honored with a nomination...
The Shortest Lasting SNL Cast Members 8.9k VIEWS Since 1975, Saturday Night Live has been the dream job for aspiring comedians everywhere. However, like all dreams, sometime...
#28 of 148 Dreamcasting Celebrities We Want To See On The Masked Singer 7.1k VOTES The US version of The Masked Singer has taken social media by storm and no wonder. With secret, costumed celebrities and clu...
All The Celebrities Who Call Chicago Home 446k VIEWS Several famous actors, musicians, and comedians have lived in Chicago, Illinois. Many celebrities were born in Chicago and o...
Famous People Named Laurie 3.5k VIEWS Ever thought about how many famous people named Laurie are out there? This list of celebrities named Laurie will show you ...
What The Cast Of 'Roseanne' Looks Like Over 20 Years Later 31.3k VIEWS No one would've guessed a year ago that we'd get to see the Roseanne cast today, here, now, living in our time and dealing w...

Laurie Metcalf is also found on...