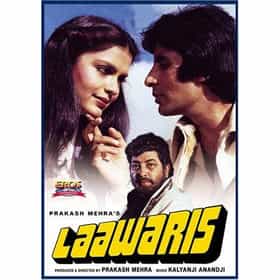 Laawaris is a blockbuster Bollywood drama film released in 1981 directed by Prakash Mehra. The film became known for its hit song "Mere Angene Mein, Tumhara Kya Kaam Hai" rendered twice: the first time by a young Alka Yagnik who earned her first Filmfare nomination as best female playback singer, and the second time by Amitabh Bachchan. The second version turned out to be a mega hit especially due to Amitabh's performance in drag wear. The lyrics of the song were funny and gives tribute to all kinds of wives be they fat, tall, dark skinned or fair skinned. Even until today the song is popular among audiences. Laawaris starred Amitabh Bachchan, Amjad Khan, Zeenat Aman and ... more on Wikipedia

Lawaaris is also found on...