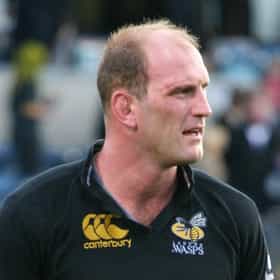 Lorenzo Bruno Nero Dallaglio (born 10 August 1972), known as Lawrence Dallaglio, is a retired English rugby union player, former captain of England, and 2016 inductee of the World Rugby Hall of Fame. He played as a flanker or number eight for London Wasps and never played for another club, having arrived at Sudbury as a teenager. Playing in all three positions in the back row, he won 85 caps for England, and was part of the team that won the 2003 World Cup. He is one of a very small number of players to have won both the Rugby World Cup and Sevens World Cup. He went on three tours with the British and Irish Lions, winning three caps. He now regularly works as a pundit on television ... more on Wikipedia

Lawrence Dallaglio is also found on...