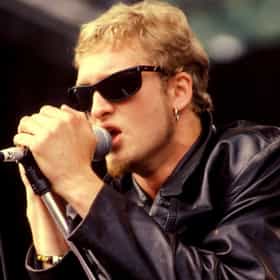 Layne Thomas Staley (born Layne Rutherford Staley, August 22, 1967 – April 5, 2002) was an American musician best known as the original lead singer and co-songwriter of the rock band Alice in Chains. The band rose to international fame in the early 1990s during Seattle's grunge movement, and became known for Staley's distinct vocal style and tenor voice, as well as the harmonized vocals between him and guitarist/vocalist Jerry Cantrell. Staley was also a member of the glam metal bands Sleze and Alice N' Chains, as well as the supergroups Mad Season and Class of '99. From mid-1996 onwards, Staley was out of the public spotlight, never to perform live again. Staley struggled for much of ... more on Wikipedia

Layne Staley is ranked on...

#210 of 455 The Greatest Singers of the Past 30 Years 201.1k VOTES One of the most debated topics in music is who are the greatest singers of the past 30 years. Whether you're a huge Whitney ...
#38 of 711 The Best Rock Vocalists 1.2M VOTES The best rock vocalists of all time are the frontmen of our favorite rock bands or those solo artists whose voices are some ...
#317 of 1,066 The Best Singers of All Time 2.2M VOTES Who are the best singers of all time? That's a tough question to ask. This list includes many of the greatest, most famous v...
#26 of 211 Rock Stars Whose Deaths Were The Most Untimely 261.8k VOTES Dead rock stars, ranked in order of how much potential great music was lost to this world by their untimely passing. Th...
#302 of 931 People who voted for Layne Staley... People in the Northeast are 2x more likely to vote for this People Age 30 to 49 are 3x more likely to vote for this People We Wish Were Still Alive 3.2M VOTES RIP to our world's greatest achievers, those who changed the way we live and the ways we thought. This list of people we wis...
#42 of 298 The (Male) Singer You Most Wish You Could Sound Like 129k VOTES What male singer's voice would you most like to have? This is a different question than "who are the best vocalists eve...
#291 of 519 Which Artist Would You Bring Back From The Dead To Write One More Song? 121.8k VOTES Many of the world's greatest musicians remain highly respected even in death. The world often mourns the loss of t...
#39 of 413 The Best Frontmen in Rock 774.6k VOTES   Giving out the title of best frontman in rock is like crowning someone the king of rock and roll. There are so many...
#30 of 152 The Greatest Musicians Who Died Before 40 63.1k VOTES   Some of the best musicians in history only lived for a few short decades. This list ranks those musicians whose live...
#33 of 139 People who voted for Layne Staley... People in the Midwest are 2x more likely to vote for this Bygone Musicians You Most Want to See Perform as Holograms 72.4k VOTES A hologram wish-list for dead musicians. At the Coachella Music Festival in April of 2012, a holographic image of the deceas...
#27 of 54 The Best Singing Drummers 21.2k VOTES Prepare to be impressed by this list of drummers who also sing. These musicians are both notable as capable drummers and as ...
#13 of 51 The Greatest Rock Stars Who Died Before 40 17.4k VOTES On this list you can find all of the hottest, most talented rock stars - from any decade or genre - who didn’t make it to ...
Famous People Who Have Been Through Depression 114.3k VIEWS This is a list of famous people with depression, or who have suffered from depression at some point in their lives. Who are ...
Famous Rhythm Guitarists 15.9k VIEWS A List of Famous Rhythm Guitarists with photos! These are musicians who are masters of their craft. While it is often the si...

Layne Staley is also found on...