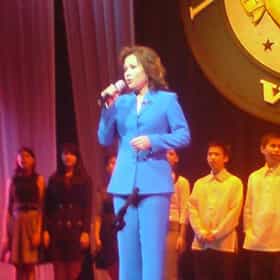 Maria Lea Carmen Imutan Salonga, , (; born February 22, 1971) is a Filipina singer and actress, best known for her roles in musical theatre, for supplying the singing voices of two Disney Princesses, and as a recording artist and television performer. At age 18, she originated the lead role of Kim in the musical Miss Saigon, first in the West End and then on Broadway, winning the Olivier and Theatre World Awards, and becoming the first Asian woman to win a Tony Award. Salonga is the first Filipino artist to sign with an international record label (Atlantic Records in 1993). Salonga was the first actress of Asian descent to play the roles of Éponine and Fantine in the musical Les ... more on Wikipedia

Lea Salonga is ranked on...

#749 of 1,066 The Best Singers of All Time 2.2M VOTES Who are the best singers of all time? That's a tough question to ask. This list includes many of the greatest, most famous v...
#9 of 85 The Best Broadway Stars of the 21st Century 11.3k VOTES This list ranks all of the greatest stars to have performed on Broadway during the 21st century, young and old, male and f...
#2 of 83 The Best Female Broadway Stars of the 21st Century 16.2k VOTES Female performers have taken Broadway by storm in the 21st century, with many talented women drawing audiences night after...
#4 of 52 People who voted for Lea Salonga... People outside of the US are 3x more likely to vote for this People on the West Coast are 4x more likely to vote for this The Greatest Female Broadway Stars 25.4k VOTES These leading ladies have made audiences laugh, cry and wish that the show would never end. Some have had long-running car...
#6 of 129 The Greatest Broadway Stars of All Time 48.1k VOTES These Broadway stars have been the biggest audience draws in the past, and many are sure to be in the future. All the thea...
#36 of 196 The Best Original Pilipino Music Bands/Artists of All Time 77.3k VOTES Do you love original Pilipino music, otherwise known as OPM? If so, you're at the right place. This is the best OPM, or...
Famous People with Long Names 104.2k VIEWS A list of celebrities who have very long names. Some have multiple middle names, and some are from cultures where their su...

Lea Salonga is also found on...